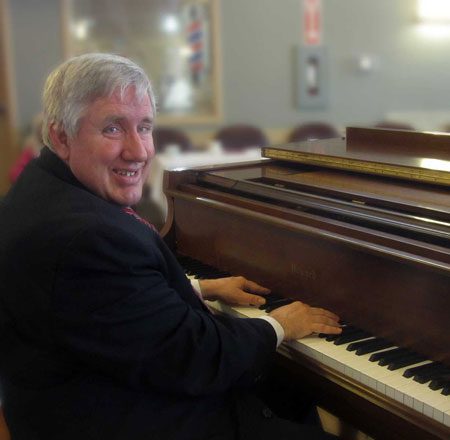 Play It By Ear

​Tim Westgarde learned to play piano by ear at the age of six. He had no piano lessons, just a passion to play. Born with cataracts in both eyes and legally blind, he endured numerous operations to improve his sight. Through it all he continued to pursue his love affair with the piano, but he never learned to read music and still learns new songs by ea​r.

He began his performance career playing in retirement homes, and continues to play for seniors on a regular basis. It was around 2002 that Tim began composing music. Among his favorite pieces is “Road to Golden,” which he composed in 2011. His style is similar to the work of Yanni and Enya.

As a boy, Tim lived with his family in both Prince George and McBride, British Columbia. After graduating from McBride Secondary School he began to perform in restaurants, including The Log House, The Chateau, Jasper Cafe (in the Bank of Hong Kong) in Vancouver, and Vina Restaurant in West Vancouver. Soon after that he moved to Vancouver Island. Tim now resides in Nanaimo, British Columbia.